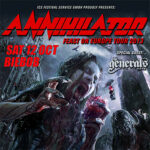 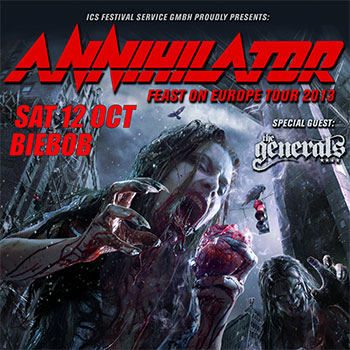 The Generals from Karlstad, Sweden started out already in 2002 and in late 2009 they released their debut cd “Stand Up Straight” (MetalCentral Records). A masterpiece that was recorded in famous Sunlight Studios with Tomas Skogsberg (Entombed, Hellacopters,Backyard Babies) as the producer! This after he crossed his ways with a demo of the band and shout out loud “That this was the best music he has heard since “Wolverine Blues”!”

The bands music has been played a lot of times on the Swedish national radio P3 on several programs. The band is also famous for their brilliant liveshows – they have now played over 300 shows around in Sweden, Finland and Holland. For ex. on Getaway Rock Festival 2010 with MEGADETH, SLASH, MOTÖRHEAD, DEVILDRIVER among others, 2000 Decibel Festival with THE HAUNTED, HYPOCRISY, NAGLFAR, GRAND MAGUS, DARK TRANQUILLITY and more + playing the mainstage(!) at Rockstad Falun together with HELLOWEEN, PAIN, SABATON, HELL and more.
They have also been support for ex. ENTOMBED, THE HAUNTED, ASTRAL DOORS etc.
A video for the song “One Eye Red” was also produced.
“The bands music is like a deathmetalciggarette with an Rock n´Roll-filter” – Marcus Grahn on Swedish biggest metalmag Sweden Rock Magazine
Now the follow up “Blood for Blood” was recorded with Rikard Löfgren in Leon Studios (Vomitory, Deathstars, Sparzanza). It´s a bit harder and a bit more pure back to basic. A new masterpiece was done! It was released in may 2013 thru Lightning Records and will take the band to the next level.
A video to the titletrack “Blood for Blood” was done!
Once again Swedish national radioprogram P3 Rock had the band as a headline in a program and played many of the new songs.

Canadian metal band ANNIHILATOR is the lifework of guitarist Jeff Waters. Founded in 1984, the band took the metal scene by storm with their debut 1989 release “Alice In Hell”, upped the ante with 1990’s “Never, Neverland” and finished off their 3-record deal (Roadrunner Records/Sony/Epic) with “Set The World On Fire”.

While most late-80’s era metal bands disappeared, ANNIHILATOR went on to forge 10 more studio cds, dvds and live releases, all consistently selling well and remaining true to the heavy metal cause. Tours with everyone from Judas Priest to Pantera to Trivium, plus dozens of headlining tours and festivals around the world have been going on steady since 1989 for this band; no rest as the demand for this band never ends. ANNIHILATOR has been touted as one of the best live acts in metal music. High-end musicianship, tight playing and massive energy and fun are what these lads are known for.

In 2003, Dave Padden joined the band as vocalist and eventually took on the role of guitar player as well, a la Hetfield. Dave has sung on the last 5 studio releases and has now etched his name in stone as a top front man in the biz.

Jeff Waters and company tear through each release with honest, raw power and energy, along with excellent technical skill and a live show that is considered one of the best in the business. Honest melodic thrash and heavy metal, combined with traces of blues, classical and jazz. Hell, there is even some death and punk in there, too.

Annihilator has given the metal world a sound that is one of the clearest, most-tasteful mixtures of huge, metal riffs with the idea of the perfect song and some legendary solo shredding as the icing on the cake. Jeff and ANNIHILATOR have been a major influence on countless well-known metal acts and musicians around the world. In fact, countless, successful non-metal acts & musicians cite Waters and Co. as an influence in their careers.

2010 saw the release of the best-selling and most critically acclaimed Annihilator cd in over a decade: the self-titled 13th studio cd “ANNIHILATOR”. Touring on this record took the band (as always) to Europe & Canada but also brought huge attendance to a South American run… ANNIHILATOR are back to the continent this May/June and will play again to massive crowds. A European tour is to follow in the fall of 2013.

With 24 years of touring history and with a reputation of having one of the strongest live performances in any musical genre, ANNIHILATOR are gearing up for studio release #14; quite a feat for any band in the metal genre and considering Jeff Waters is aged only in his mid-forties.

The new ANNIHILATOR release, simply titled “FEAST”, will be released late August 2013 via the UDR/EMI label and will also feature a bonus 15-song cd… a grand total of 24 songs in one cd release package!

Says Waters “We are truly are among the few bands with a long history, that have always waved the flag for honesty, integrity and perseverance in this hard-edge category of music.