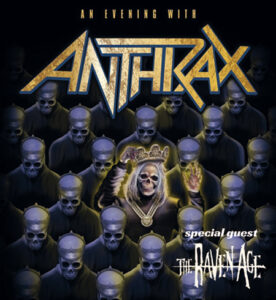 It’s time to get caught in a mosh with Anthrax! On February 20th these legendary thrashers will perform their entire Among The Living album live at Trix and of course they will perform other classics as well.

After being formed in New York City in 1981 by guitar-player Scott Ian, the band has had numerous successes worldwide: countless world-tours  and 11 classic studio records. Earlier this year the band released their latest record “For All Kings”, which brought them to Graspop Metal Meeting and Alcatraz Metal Festival for crushing sets.

The Raven Age will warm up your neck muscles.