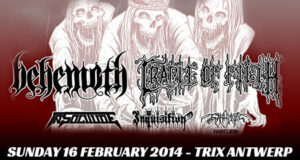 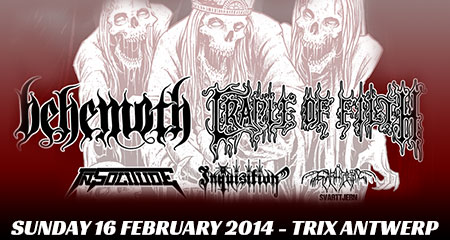 Polish Death Metal band Behemoth started way back in 1991 and released their first album “Svetevith” in 1994. The media was very positive about the album and called the band one of the best up and coming black metal talents. They didn’t hesitate to release their second album one year later, but it wasn’t until the album “Satanica” in 1999 that they chose for a different sound and evolved into Blackened Death Metal. Anno 2013 they’ve released five more albums and a new one is on the way and will be released in early 2014.

Cradle of Filth has a similar story: the British band was formed in 1991 in Suffolk and they eventually evolved from Black Metal to Symphonic Black Metal/Gothic Metal. Even controversy is something that both bands have in common. While people in Poland have tried to prevent Behemoth from playing in their country, Cradle of Filth got arrested at the Vatican for wearing ‘I love Satan’ t-shirts. The band has already released ten studio albums, The Manticore and Other Horrors being their most recent installment. This headlining tour will also mark the 20th anniversary of “The principle of evil made flesh”.
Catch Behemoth & Cradle of Filth at TRIX on February 16 together with support acts In Solitude, Inquisition & Svarttjern.