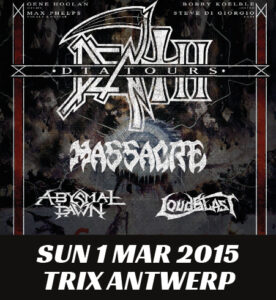 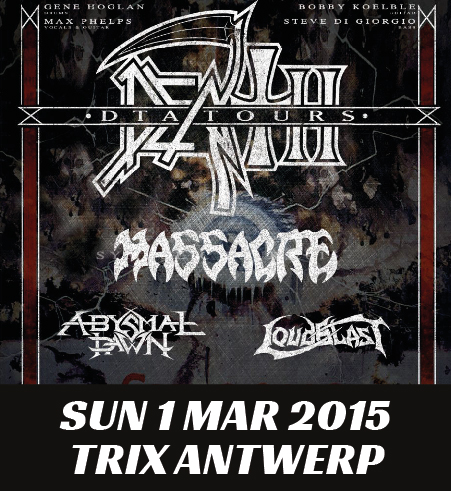 Death is considered to be one of the most influential death metal acts. The band was formed in 1983 by Chuck Schuldiner, Kam Lee and Rick Rozz under the name Mantas. After recording their demo “Death by Metal” they changed their name to Death. In 1987 the band released their debut album “Scream Bloody Gore”. In total they have released seven albums and underwent countless lineup changes.

Unfortunately, Chuck Schuldiner lost the battle with cancer in 2001. With his dead the band disbanded the same year. To pay tribute to Chuck former Death members formed Death DTA.

Abysmal Dawn, Loudblast & Thurisaz will open up for them.

As many metal fans know, MASSACRE has broken up due to internal matters happening in the midst of our last North American tour with them in December. This sucks because it obviously means that MASSACRE will not be part of the upcoming European DEATH DTA Symbolic 20th Anniversary Tour. DTA’s European booking agency RTN and I have tried unsuccessfully to find a replacement band, even though we made offers to other cool bands – there were always scheduling conflicts or some other reason why it didn’t work out with any of the bands we approached. To give a better DTA experience to everyone coming to the European tour dates, and to offer our regrets for everyone losing a band on the package, DTA will play a longer set, adding a few more DEATH songs for additional headbanging. On top of that, all official DTA tour shirts will have a 5 euro discount for ticketholders. I promise everyone that this is the most powerful DTA lineup I’ve ever witnessed, and you will not want to miss Di Giorgio, Hoglan, Koelble and Phelps (with the able aid of Kummerer) play those DEATH Symbolic songs, as well as other DEATH classics. Take part in the collective experience and honor Chuck Schuldiner’s legacy together as one – get your ticket for the unforgettable European DEATH DTA Symbolic 20th Anniversary Tour!