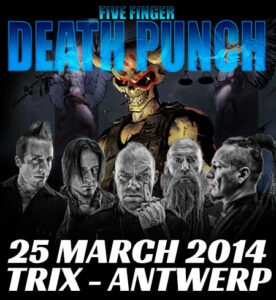 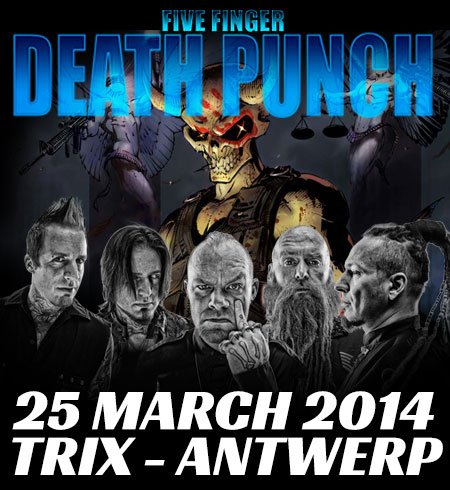 Supergroup Five Finger Death Punch was founded in 2005 by Zoltan Bathory, ex-bassist of U.P.O., and drummer Jeremy Spencer. Bassist Matt Snell & vocalist Ivan Moody joined one year later and at the end of the year the band had recorded their debut album ‘The Way of the Fist”. They also found a guitarist in Darrell Roberts. Shortly after the band signed a record deal with Firm Music. It also landed them a tour with KoRn and Disturbed.

In May 2009 the band announced their second studio album “War is the Answer”. In promotion of the album they went on tour through the US and Europe. Their hard work payed off, because the album was a true success. Just a year later FFDP started working on their next album, sadly without bassist Matt Snell who had departed from the band. Chris Kael was his replacement and together they released “American Capitalists” in October 2011. It was another successful album and so the pressure was on for the follow-up.

The band surprised us all by releasing a double album called “The Wrong Side of Heaven and the Righteous Side of Hell”. Volume I was released in July and Volume II followed this month. FFDP will present this new double album at TRIX on March 25. Get your copy here.

Back in the US, Pop Evil has been building on their already impressive career having racked up 2 number 1 singles on America’s Rock Radio, 6 singles in the top 10 and 850,000 digital single sales, while playing over 1,000 shows on tours with heavy-hitters like Five Finger Death Punch, Stone Sour, Judas Priest & Black Label Society.

For the first time the band will bring their old-school rock machine to Europe supporting Five Finger Death Punch. The tour will coincide with the release of new single ‘Trenches’ out on 17th March, which represents the hard work the band has endured to bring their music to the masses. Furthermore, their upcoming album ‘Onyx’ is expected in the first half of 2014, with further singles and tours planned for the year.

Hailing from San Antonio, Texas, the five piece metal/hardcore hybrid juggernaut,  Upon a Burning Body, has been turning heads in the underground DIY circuit since 2005. Their hard work definitely paid off, because in 2009 they were chosen as the special guests for the DevilDriver, Emmure, Despised Icon & Veil of Maya Thrash and Burn Tour in Texas. In the same year they were signed to Sumerian Records. A year later they released their first full length album The World Is Ours. Their second album, Red. White. Green, was released on March 26, 2012.