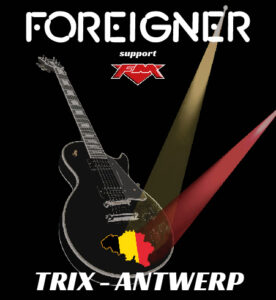 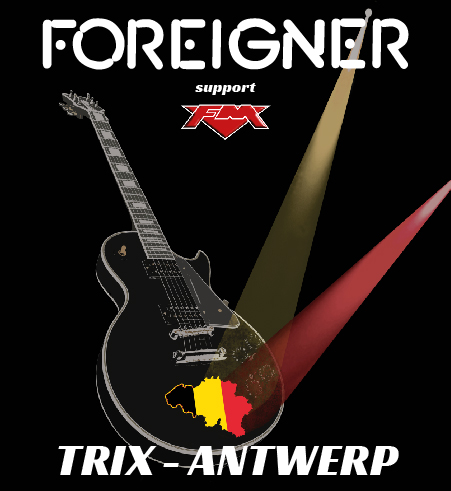 FOREIGNER with special guests: FM will appear onstage together for the first time ever taking in

“I’m thrilled to be coming back to Belgium after the show on graspop metal meeting 3 years ago,” says Foreigner’s founding British member and lead guitarist, Mick Jones. “We’re looking forward to having a great time.”

FOREIGNER, one of the biggest rock bands of all time, are internationally renowned for creating some of the most iconic songs in rock music. With ten multi-platinum albums and sixteen Top 30 hits, Foreigner is universally hailed as one of the most popular rock acts in the world with a formidable musical arsenal that continues to propel sold-out tours and album sales, now exceeding 75 million.

Responsible for some of rock’s and roll’s most enduring anthems including “Cold As Ice,” “Juke Box Hero,” “Feels Like The First Time,” “Urgent,” “Head Games,” “Waiting For A Girl Like You,” “Say You Will,” “Dirty White Boy,” “Long, Long Way From Home,” and the worldwide #1 hit, ”I Want To Know What Love Is,” Foreigner continues to rock the charts more than thirty years into the game.

Special guest FM will be opening the concerts on the upcoming european tour. FM formed in 1984 and quickly hit the road touring with the likes of Meat Loaf, Tina Turner, Foreigner, Gary Moore, Status Quo and the white-hot Bon Jovi on their “Slippery When Wet” tour. FM released their debut album “Indiscreet” in 1986 to great critical acclaim.

For the next 12 years FM consolidated their position at the forefront of British melodic rock, touring everywhere they could to promote releases such as 1989’s “Tough It Out” and 1992’s “Aphrodisiac.”