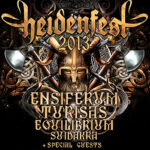 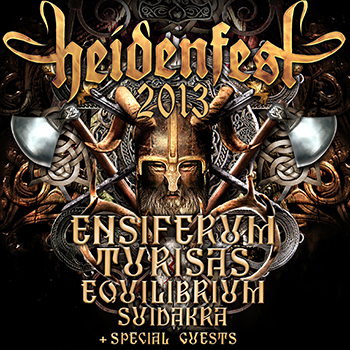 In the last couple of years, the Heidenfest turned out to be a unique and not-to-be-missed tour package when it comes to the biggest names in the field of heathen / Viking metal and bands offering you the best in between war anthems and drinking horn frenzy! Which is why the 2013 line up again looks like the wet dream of every heathen metal warrior:

Headlining will be mighty genre legends ENSIFERUM from Finland! These much-loved Viking and folk metallers definitely know how to get a good party going and have recently released their opus magnum “Unsung heroes” in 2012. Travelling with them will be fellow countrymen TURISAS who are currently busying themselves with recording a brand new album and whipping out that infamous red / black war paint!

Germans EQUILIBRIUM must be considered as true stars of the German pagan metal genre: they`ve set fire to every club so far with their explosive mixture of catchiness and heaviness! These guys and girls are also working on a new album right now. SUIDAKRA combine melody with death metal and folk parts – “Eternal defiance” will be released end of May 2013.