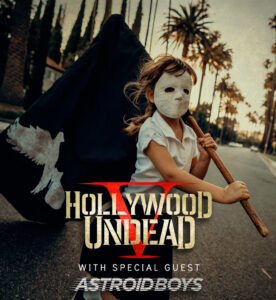 On February 6th, Hollywood Undead, on the most diverse bands in the rock/alternative scene, is coming to Muziekcentrum Trix. As the band name indicates, Hollywood Undead hails from the City of Angels. Just like Ghost and Slipknot, the band is known for wearing masks on stage, but unlike those bands Hollywood Undead doesn’t just stick to metal or rock. The band manages to blend in various musical styles ranging from alternative rock, metal to hip hop. On October 27th, the band will release its fifth record, which is fittingly called “Five” (or “V”), so no doubt that we’ll get to hear some new Hollywood Undead tunes!