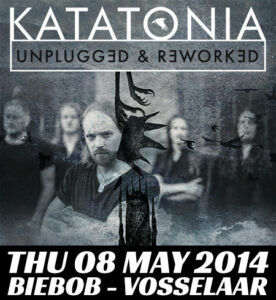 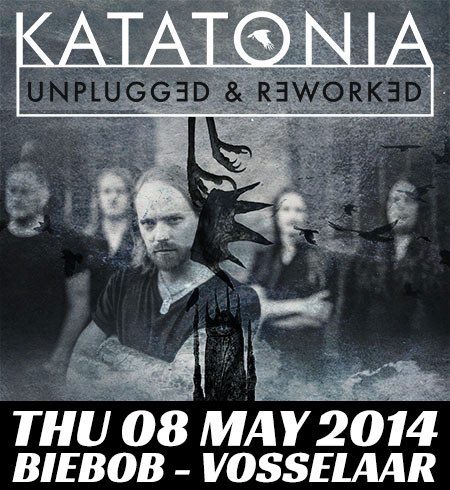 In September 2013 Katatonia returned with Dethroned and Uncrowned released through Pledge Music and in partnership with Kscope, Peaceville’s sister label.

Dethroned and Uncrowned, a reworking of 2012’s Dead End Kings, allowed the band to explore a more progressive sound, creating new moods and textures while still staying truthful to the core of the songs.

In May 2014 Katatonia will take their ‘Unplugged & Reworked’ set-up on the road for the first time, presenting an intimate evening with the band each night performing tracks from Dethroned and Uncrowned alongside atmospheric classics from their entire career, stripped and reworked.

“Many people who appreciated how we “dethroned” and “uncrowned” last year’s ‘Dead End Kings’ album have been hoping and even insisting the same would also be done to one or more of our older albums. Admittedly, not likely to happen many a moon ago, at least not with a studio album, we are excited to let you know that by bringing this show on the road the same possibility now opens up that door, with a live version. So expect to hear stripped and reworked songs from our entire career and have them come into equation by thriving on our atmospheric vision, the ambience of some highly unusual venues and last but not least with your presence and choir to set the mood for a soothing experience. We’re already certain this will be the most different and remarkable thing we’ve ever done!”

No matter how brightly the sun shines, sorrow will always cast its ageless shadow across the human soul. Expressing that eternal sadness is an art in itself, and over the last two decades, Sweden’s masters of melancholy Katatonia have firmly established themselves as the most passionate and skilful exponents of the form. Formed by vocalist/drummer Jonas Renkse and guitarist Anders Nyström in Stockholm in 1991, the band emerged from the amorphous maelstrom that was the nascent death/doom metal scene; a darker, more emotionally resonant sibling to the ongoing extreme metal world, and one that offered a new and more humane perspective on life’s darker days.

The band’s first releases, the Jhva Elohim Meth…The Revival EP and debut album Dance Of December Souls may have seemed to draw from the same set of influences that inspired like-minded bands across the North Sea like Paradise Lost and My Dying Bride, but by the time Katatonia arrived at 1996’s Brave Murder Day (which featured guest vocals from Opeth’s Mikael Åkerfeldt), the band had already begun to plough their own tearful furrow.

“Initially we had no masterplan,” says Renkse today. “All we wanted was a band of our own, as we were totally devoured by the death and doom metal scene that was happening. It wasn’t until later that we could actually carve out our own space and see things with a broader perspective. Katatonia has become a philosophy, at least for ourselves, since it is pretty much all we have. It’s dark and personal music and lyrics, no matter what the environment around us.”

In 1998, Katatonia released Discouraged Ones, an album that saw them step away from more traditional doom-laden atmospheres into an increasingly distinctive sonic world. Incorporating a wide variety of influences, from gothic rock to dark folk, the band’s evolution was gathering pace and their songwriting was maturing accordingly. With Jonas Renkse stepping away from the drum stool to focus on his role as vocalist, the Katatonia sound became more focused and intense on 1999’s Tonight’s Decision; a bravura collection of downbeat hymns to the void that set the tone for the new decade that followed.

“Most of our evolution has occurred naturally,” explains Renkse. “We started as Paradise Lost fanboys, but now I think we have a different sound, something we have crafted over the years. With every new album we try to push the boundaries of songwriting and expand the concept of Katatonia without abandoning our foundation and roots.”

As the 21st century has progressed, Katatonia have become one of the most revered and cherished of all bands in the modern heavy music firmament. Through extensive touring and a steady stream of superlative studio releases, including 2001’s classic Last Fair Deal Gone Down and its coruscating 2003 follow-up Viva Emptiness, the Swedes have spread their baleful gospel across the globe, refining and redefining themselves with every step into new territory. With 2006’s The Great Cold Distance and, in particular, 2009’s universally acclaimed Night Is The New Day, Katatonia have stretched beyond their roots in the metal scene and drawn in fans from all across the musical spectrum, not least in the progressive rock realm that has also embraced peers like Opeth and Anathema in recent times.

“Yes, Night Is The New Day has been a very successful album for us,” says Renkse. “We did a lot of touring for it, and we could see the fan base expand from one tour to another. Our audience is the same, but bigger and perhaps more varied. It’s people like ourselves…ordinary people with a big love for music.”

After numerous line-up changes over the years, the Katatonia of 2012 is more potent, focused and creatively impacting than ever before. Renkse and Nyström – alongside guitarist Per Eriksson, bassist Niklas Sandin and drummer Daniel Liljekvist – are at the peak of their powers right now, and their brand new studio album Dead End Kings provides incontrovertible evidence of their unstoppable artistic momentum. A rich, adventurous and endlessly evocative masterwork that exhibits all the Swedish quintet’s established traits while absorbing countless fresh ideas into that monumental sonic brew, this is plainly the strongest and most beguiling album in the Katatonia catalogue to date. It also proves that sadness comes in many shades and that no one is safe from its cold allure.

“Dead End Kings represents progression and taking things to the next level,” concludes Renkse. ”The writing was a little more intense and spontaneous for this one. I think that’s the biggest difference. But it was made with the same mindset as the last few albums. It just had a little more fire involved. We don’t want to repeat ourselves. We are still hungry for new music.”