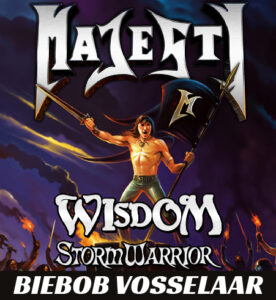 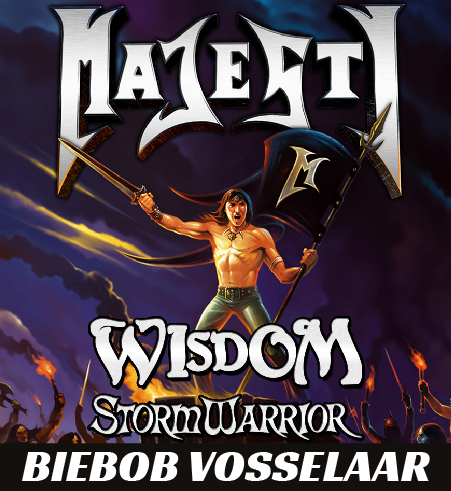 Put on your leather jackets and raise those fists in the air – because pure steel will greet you on stage soon!!! German true metal giants MAJESTY will embark on a headliner tour in February and March 2014, and supporting them will be like-minded Hungarian act WISDOM and Hamburg-based metal merchants STORMWARRIOR.

With their comeback album “Thunder rider”, MAJESTY proved in January 2013 that they still stand for finest teutonic true metal and unmatched anthems galore! No wonder the album entered the German charts at #55. A quality level that “Banners high” seems to surpass with ease: said metal manifesto will be unleashed on the masses December 20th, 2013, and fans can look forward to epic songs, glorious vocals and incredible shredding! “Banners high” is also the first-ever concept album in the band`s history and tells a fantasy story penned by MAJESTY singer Tarek „MS“ Maghary himself.

Since their founding in 2001, Hungarian guardians of steel WISDOM love to combine epic spirit with pure-bred power metal that gives acts like BLIND GUARDIAN a run for its money: after the release of »Judas« and a tour with genre giants SABATON, it`s now time to defend WISDOM`s new standing in the scene with a fresh bunch of powerful anthems! Should be a piece of cake with their mighty third album »Marching for liberty«…

With a name like STORMWARRIOR you`re basically bound to play pure heavy metal! The Hamburg-based band sticks to that and thrilled us with anthems such as “Heavy Metal Fire” or “Defenders of Metal”. In recent years though, STORMWARRIOR started to include viking metal elements that showed quite strongly on albums like “Heading Northe” (2008). “Thunder & steel” is set for a release in February 2014.