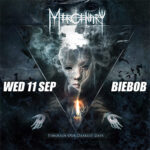 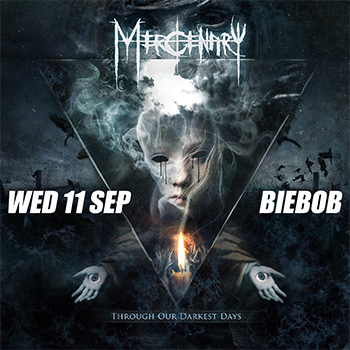 Just as they stand unflinching in a surreal frozen sea of ice on their latest promotion picture, Scandinavian MERCENARY stand their ground musically as bold and confident as ever on their seventh album »Through Our Darkest Days«. After the roller coaster of loosing half their lineup in 2009 and presenting a renewed lineup and a new musical approach on 2011’s »Metamorphosis«, MERCENARY’s new album combines the strength of their latest approach with both a fresh sound and the grand melancholy and soaring clean vocals of past albums.

Over the past decade Mercenary has been one of the most active bands in the upcoming Danish metal scene and their albums have been highly-acclaimed by both fans and media. The typical trademark mix of huge, epic melodies and aggression has brought them not only appearances on some of the biggest festival stages but also support slots for bands such as MEGADETH, ARCH ENEMY, NEVERMORE, KING DIAMOND and DEATH ANGEL. The unusual mixture of elements from many genres within metal is in truth the band’s biggest asset: an organic diversity bound together by tight songwriting and the ability to stand up to any sort of audience and make them lifetime MERCENARY followers.

The year 2009 proved to be a turning point in the band´s career as three members took their leave and René Pedersen stepped up to take the reins as lead singer.  After years of internal difficulties this proved to be a great source of energy and motivation, and with a newfound sense of purpose and renewed spirits the strong Danish showed their critics a new vision of themselves with »Metamorphosis« and made a great comeback: “On »Metamorphosis« it was important for us to reinvent our sound and experiment rather than just trying to copying the sound of the old line-up. And we were really happy with the direction and the result. But with »Through Our Darkest Days« we felt that the right thing to do was to combine the new elements with more classic elements from Mercenary’s older material, so it’s only fair to say that the new album combines the best of both eras of the band.”

Again Mercenary decided to record with long time collaborator and Danish master producer Jacob Hansen in order to get the signature powerful and crystal clear production, and for the first time the cover artwork was done by MNEMIC guitar player Mircea Gabriel Eftemie. René comments: “The cover artwork portraits a dark atmosphere, symbolizing the darkness that surrounds us everyday. But in darkness there is always a light, which in this case is symbolized by a burning candle, and the figure that holds its eyes in its hands, showing a piece of the world as seen through our eyes. Mircea has captured the essence of the music with its dark melancholic substance. But this album is also a celebration of life with a message for people to forget about your losses, don’t spend your days being unhappy about what you could have had, and instead focus on the things you already have. We are in a very comfortable place in our lives, and as a band where we can honestly say that we have our darkest days behind us. We have overcome a lot of shit through the years as a band, and we have still managed to keep the passion and the love for the music, and most importantly we have managed to keep expanding our musical family that is “The Black Brigade”. And that is worth celebrating. We love what we do, and we love our fans who make it possible for us to do it!”