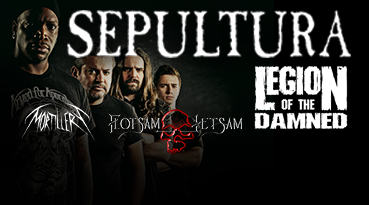 Whole generations of bands have been influenced by killer albums such as „Arise“ or „Chaos AD“, and the fourpiece has always been a revolutionary force: „The mediator between head and hands must be the heart“ – which will be released October 25, 2013 – proves that proudly! This multi-faceted beast has been produced by none other than Ross Robinson.

A hand-picked triumvirate will support SEPULTURA on their upcoming European headliner tour – amongst them Dutch warbeasts LEGION OF THE DAMNED who cordially invite you to a lethal midtempo death / thrash moshpit with „Ravenous plague“! The follow-up to „Descent into chaos“ (2011) will be released in December 2013.

A real treat for all old school fanatics will be the participation of FLOTSAM & JETSAM! The American thrash legends made heads turn in the 80s with much-hailed cult albums such as „Doomsday for the deceiver“ and have proved in 2012 with „Ugly noise“ how to combine a modern approach with classic aggression.

The openers of the tour are the youngsters of the line up at the same time: MORTILLERY from Canada pose the perfect equilibrium between classy modern thrash metal and a profound love for the old school. These dudes from Edmonton sound a lot like the glorious days and bands like Nuclear Assault…just check out their brand new album „Origin of extinction“!

Old school, new school – the „The mediator between head and hands must be the heart“ tour will unite thrashers of each and every kind!