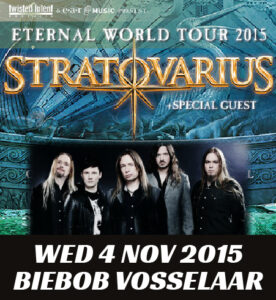 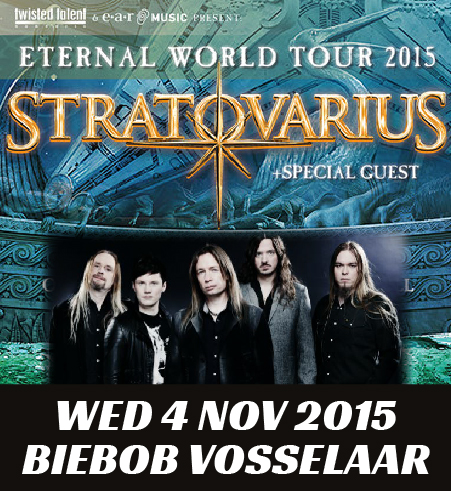 Stratovarius was founded in 1984 in Finland under the name Black Water. They went through a number of lineup, style and name changes before the band found its own voice. The founding members were Tuomo Lassila, Staffan Stråhlman, and John Vihervä. By 1985, the name had changed to Stratovarius, and guitarist/vocalist Timo Tolkki entered the band.

Their debut album “Fright Night” was released four years later, in 1989. The follow-up, “Twilight Time”, established a fan base in Japan, which made the album the biggest selling import of the year. Evidently the band embarked on an extensive tour throughout Japan in promotion of their third album “Dreamspace” in 1994. With the release of “Fourth Dimension” in 1995 vocalist Timo Kotipelto, guitarist Timo Tolkki, bassist Jari Kainulainen, keyboardist Jens Johanssen and drummer Jorg Michael were added to the band. For the recording of their next two albums in 1996 & in 1997 the band added a choir and orchestra to their sound.

Anno 2015 the band have released another eight albums and are in the midst of recording a new one, called “Eternal”. The album will be issued in August and afterwards the band will embark on their Eternal World Tour. Stratovarius have planned a stop at Biebob Club on November 4.