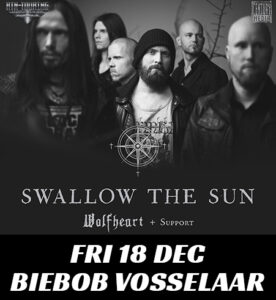 Finnish melancholy death/doom metal masters Swallow the Sun was formed back in 2000 by Juha Raivio and Pasi Pasanen. A year later the pair was joined by guitarist Markus Jämsen, vocalist Mikko Kotamäki, keyboardist Aleksi Munter and bassist Matti Honkonen. After recording the demo “Out of This Gloomy Light”, the band landed a record deal with Firebox Records. That same year they recorded their debut album “The Morning Never Came”.

Two years later their album “Ghosts of Loss” followed, which was very well-received by fans. After signing with Spinefarm Records and embarking on a tour throughout Europe, the band released a third album “Hope”. With their 2008 release “Plague of Butterflies” the band shifted to a more atmospheric, varied and progressive sound.

Anno 2015 the band has launched two more albums, “New Moon” in 2009 and “Emerald Forst and the Blackbird” in 2012. In November the band will release a triple album ““Songs from the North I, II & III”. In support of the album the band is embarking on a tour throughout Europe. Expect them at Biebob Concerts with support act Wolfheart on December 18.