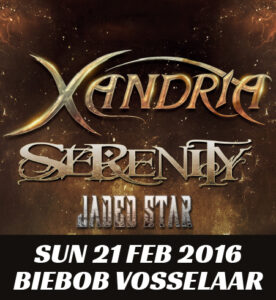 German symphonic metal band Xandria was founded in 1994 by Marco Heubaum. After a few demos, some line-up changes and a record deal with Drakkar Records they released their first album “Kill The Sun” in 2003. That exact same year they started working on their sophomore record, “Ravenheart”. Unfortunately bassist Roland Krueger left the band right before the release of the new album and was replaced by Nils Middelhauve. The album eventually was launched a year after their debut. Their third album “India” followed in 2005 and was more oriented to symphonic metal. Two years later the band released “Salomé – The Seventh Veil”, which would also be the last album with vocalist Lisa Middelhauve.

After an extensive search for a new vocalist, the band started working on “Neverworld’s End” in 2010 with singer Manuela Kraller. The album was launched in 2012 and the band toured throughout Europe as support act for Epica. However, Manuela decided to leave Xandria, leaving the remaining band members to look out for another vocalist. They found the perfect replacement in Dianne van Giersbergen. With these renewed forces the band started working on their most recent album “Sacrificium”, which was released in 2014.

Now the band is gearing up for Symphonic Metal Nights, their European headline tour together with Serenity and Jaded Star. So write down February 21 in your agenda, because the bands will perform at Biebob Concerts that day.