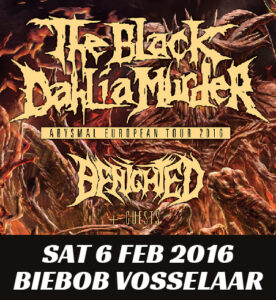 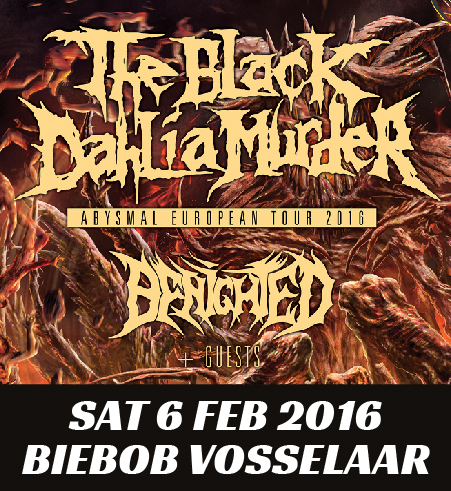 Detroit’s The Black Dahlia Murder, named for the infamous 1947 slaying of 22-year-old Elizabeth Short, aka the Black Dahlia, actually sounds like they should live in Scandinavia. Formed in January 2001, the Black Dahlia Murder followed their six-song “What a Horrible Night to Have a Curse” demo with the four-track “A Cold-Blooded Epitaph” EP, which was released on their own Lovelost Records. Having already made a number of acclaimed concert appearances, the group signed with Metal Blade in 2003 and was soon recording its debut album, “Unhallowed”.

The 2005 release “Miasma” and 2007’s “Nocturnal” kept death metal as the group’s foundation, though the band began exhibiting an increasingly melodic streak that came to fruition on 2009’s brutal but majestic “Deflorate”. The group’s fifth studio album, “Ritual”, arrived in the summer of 2011, followed by “Everblack” in 2013, which was greeted with almost universal acclaim. After a year touring, the Black Dahlia Murder went back into the studio, together with producer Mark Lewis and former bass player Ryan Williams. The result is their newest album “Abysmal”, which will be released this week. Following the release, the band is embarking on tour throughout Europe. Catch them at Biebob Vosselaar on February 6.