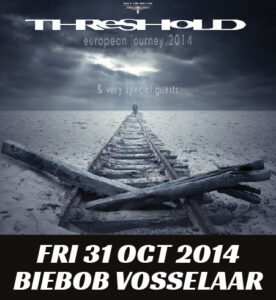 British progressive metal band Threshold was formed in 1988. Their debut album “Wounded Land” saw the light of day in 1993. “Psychedelicatessen”, released in 1994, and “Extinct Instinct”, released in 1997, followed. A year later, in 1998, “Clone” came out, their most successful album to date. The band has released six more albums since then, with their 2014 release of “For The Journey” as their latest installment.

In support of the new album the band will embark on a tour throughout Europe. Their upcoming “European Journey 2014” run kicks off at Biebob Concerts on October 31.