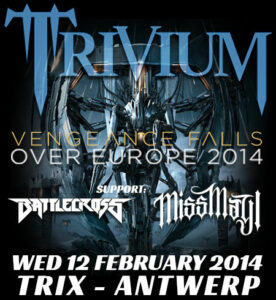 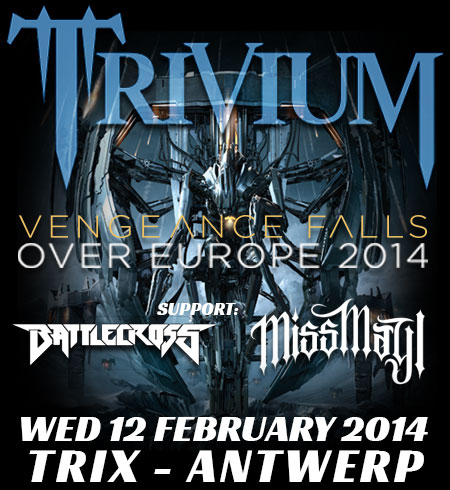 Back in 2000 Trivium was formed in Orlando, Florida. It took three years for the band to secure a contract and release their debut album, Ember to Inferno. It was an immediate success, so a switch to Roadrunner Records was quickly made. In March 2005 they released Ascendancy, which was reissued the next year. Following this release they toured through America and Europe with bands as As I Lay Dying, GWAR, Cannibal Corpse and Terror.

The album Crusade was released in 2006 and had a different sound to it, because of the emphasis on singing instead of screams and growls. However, the album didn’t live up to the high expectations, so they stayed true to their original thrash style in their fourth album Shogun. Sadly, 2010 marked the year of drummer Travis Smith’s departure, who was replaced by Nick Augusto. It also marked the year they started to work on In Waves. This album was released in 2011 and they went on the road again. A stop at Graspop Metal Meeting 2012 was inevitable and the band killed it on stage. Last month their most recent work, Vengeance Falls, was released, which brings the band back to Belgium, to be more precise  to TRIX on February 12.

“I hope this inspires people to do something,” concludes Matt. “I hope it inspires them to pick up instruments, start composing poetry, begin writing a book, or just being creative. I want it to encourage creativity and show everyone there’s so much more to life. When the chips are down and things are going bad, you can make something or escape to somewhere else. I want to be that escape. Even though this is a dark record, it can create positivity for those who dive into it.”

This is who Trivium are. This is Vengeance Falls.